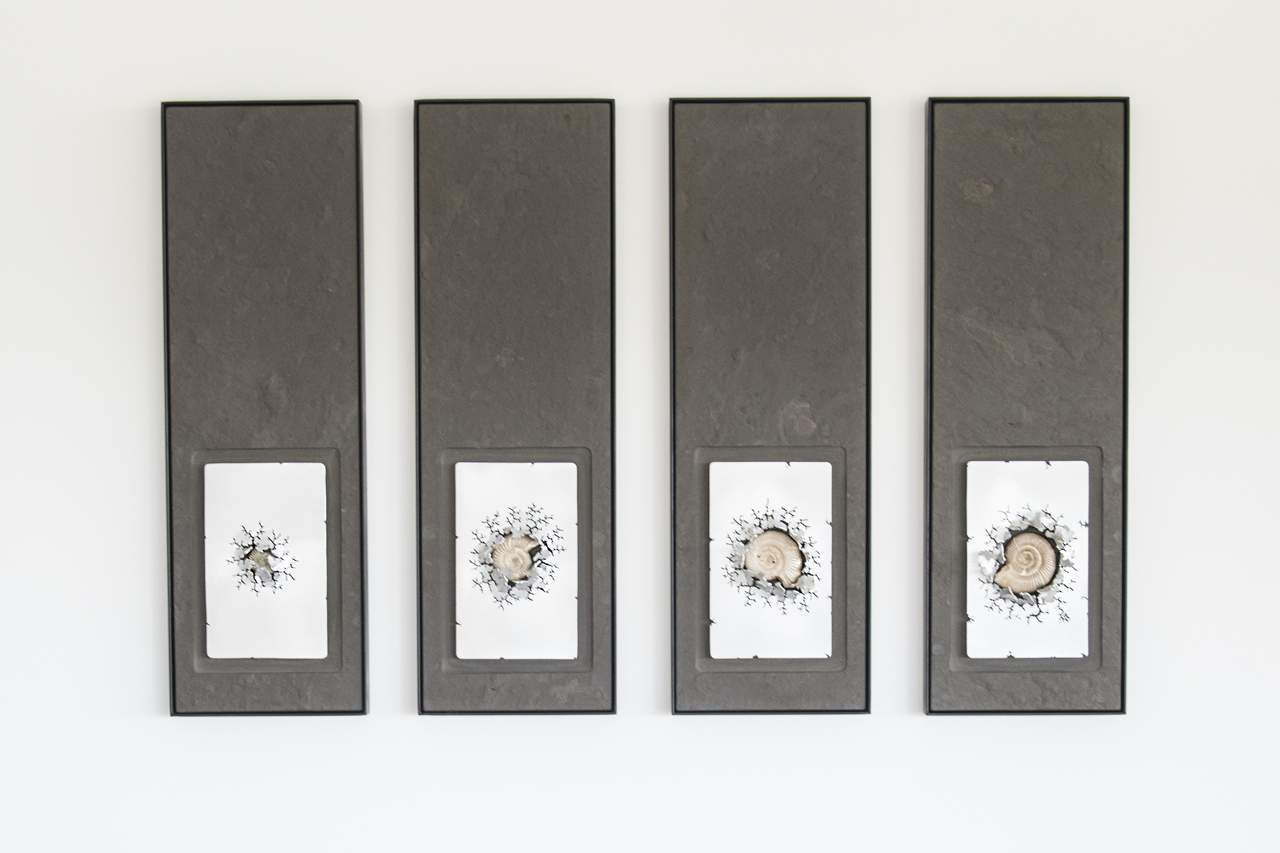 A story by Gerda-Marie Adenau

So, I'm back with Hendrik. One of his latest works: «Attempt to explain».  Four slates from Holzmaden. A silver plate on each panel. Furrowed by cracks, out of the middle of which an ammonite pushes itself with all its might into the world. At first only a fraction of it can be seen, then more and more, until finally it lies almost completely visible in the silver plate. It looks as if a chick is breaking open its eggshell from the inside and fighting its way into life.

"What was your technique with the cracks?" I wonder. Hendrik smiles and shows me his scroll saw with a wafer-thin saw blade. "This is an electric scroll saw.” He uses it to fabricate the fine cracks in the material and create the idea of the breakthrough, he explains.

I ask Hendrik why he devotes himself to the metaphor of the «birth of an ammonite» and what the title «Attempts to explain» is all about. After all, we all know today how ammonites were formed. "The shells were left behind by a sea that once covered the land only to retreat again."

We are still standing in front of the four panels. "You are right, Gerda-Marie, today we take this assumption for granted. But that wasn't always the case. In the past, there were completely different attempts to explain why shells are often found far from the sea, sometimes on the tops of mountains and as part of the rock." The knowledge about the sea is still relatively new.

And Hendrik begins to tell. About how people used to explain the existence of ammonites in unusual places.

Did they grow like plants or were they washed in by floods?

One of the obvious assumptions: Stones of every conceivable shape grow like plants in the earth. They just need favourable conditions. Why shouldn't mussels and oysters sprout from salty desert soils or on calcareous mountain rock? And because the wind carries the seeds everywhere, they also grow in the mountains.

Aristotle already advocated this hypothesis of so-called «spontaneous generation». However, he already had an inkling that the sea could play a key role in the formation of the earth. He wrote that the coming and going of the seas was one of the fundamental processes of the earth. The land had experienced numerous natural floods over time. With the floods, shells could have been washed into mountainous regions. Hendrik: "Like so many things, these explanations of antiquity were lost in the Middle Ages. All attempts to explain the origin of the world were traced back to the biblical book of Genesis."

"And how then did a change in knowledge come about?" I ask curiously. My interest is piqued. Hendrik looks at me. "Because of a young anatomist from Denmark. Do you know Niels Stensen alias Nicolaus Steno?" I answer in the negative and continue listening to him. "In 1638, Nicolaus Steno developed a scientific view of the earth's anatomy in Florence. He discovered that the crust of the earth hid, as it were, an archive of its own prehistory. The layers of earth that enclosed fossil shells had been formed by a gradual deposition of sediments. Each layer embodies a specific period in the past. The history of the earth is written in stone layer by layer."

Hendrik looks at the four birth stages of his ammonite. "Steno discovered the logical rules by which the faulting, uplift, erosion and stratification of the landscape and the underlying bedrock could be put into a clearly understandable order. With what he read in the rock, he could write a history of the landscape. And when this logic was extended, it revealed the history of the entire Earth."

"With this insight, Steno went against the thinking of his time, didn't he?" I sum up, waiting for his answer. "Of course, because according to the Bible, the world and the objects of nature had been created by the divine spirit. Only a generation earlier, the Pope had forced the scholar Galileo Galilei to recant his commitment to the Copernican theory of the solar system. True, times were gradually changing, and the Renaissance sought new solutions to the world's questions. Still, scientists had to be cautious."

Perhaps that was the reason, Hendrik continued, that Steno was strangely reticent in his public statements. Perhaps his hesitation to take a clear stand also stemmed from his status as a scientific newcomer, combined with his unsecured status at the Medici court.

"In any case, one thing is certain: the genius of his ideas was never fully recognised or appreciated during his lifetime." I’m learning with every word and get very close to the slates. I look at the cracks in the silver plates and understand the four stages of the slow birth of the ammonite as a symbol for the long and difficult search for an answer to the question «How do they actually come into being».

As I continue my journey into the Eifel, I keep thinking about Henrik Hackl's account of his work «Attempt to explain» for a long time. I admire Nicolaus Steno: his will to know and to understand, his span of thought and also his courage to publish his findings.  At that time this was life-threatening. Today we live in a free society. And at the same time, there are more states, cultures, religions where the value of an insight can be life-threatening.

Two weeks later, when I enter my flat in Munich, there is a package for me from Hendrik. It is a book. The Seashell on the Mountaintop: Nicolaus Steno – The Unsung Genius Who Invented Geology, Turned Science and Religion Upside-Down, and Forever Changed Human Understanding by Alan Cutler.