THE GREEN AMMONITE – A SCULPTURED GARDEN 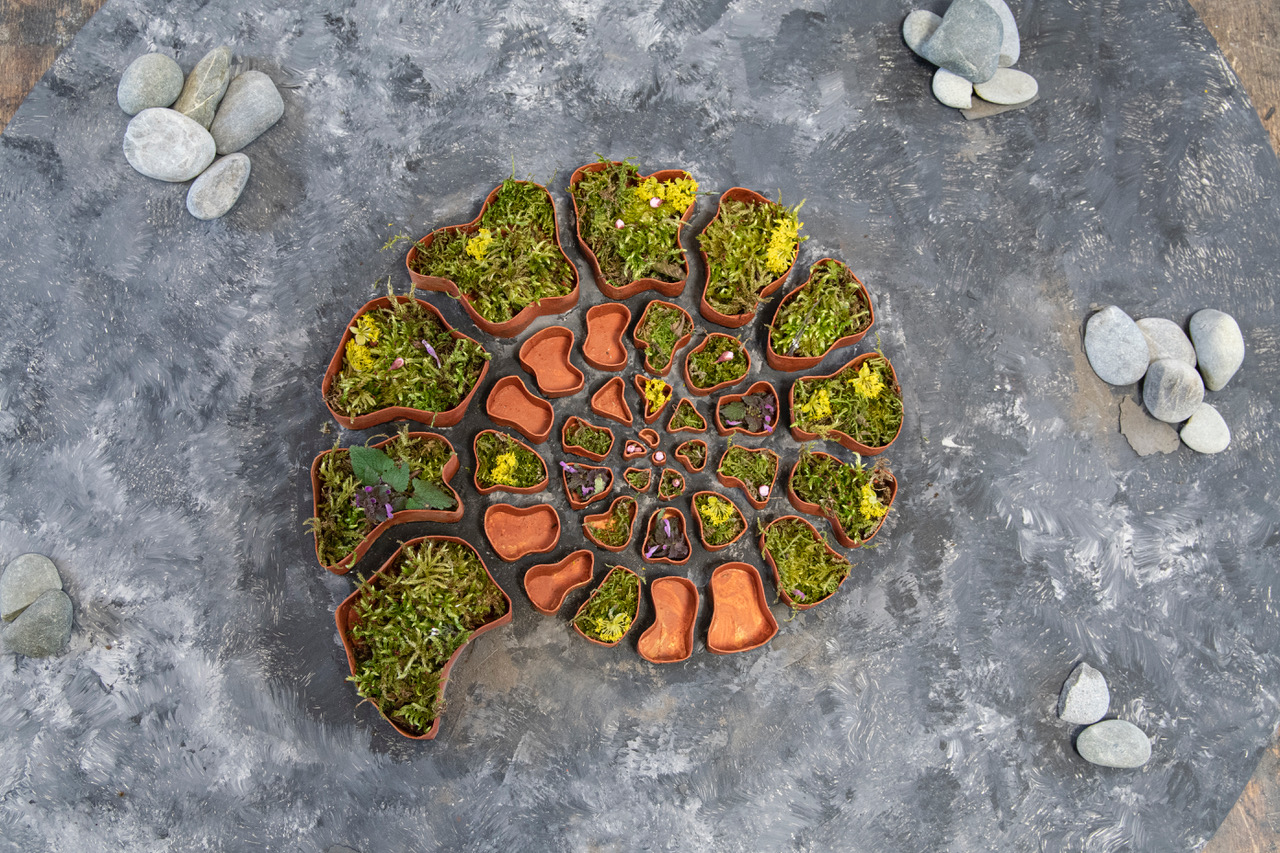 The green ammonite - a garden sculpture. Here as a model in the scale of 1:3

A giant fossil – the image of a prehistoric ammonite, made of iron, awakes out of its primeval sleep. Planted, cultivated and cared for, germinating, sprouting, growing, bearings fruit, it gently pulsates - is reborn - and comes back into life!

The complete structure consists of 35 individual components, diminishing in size towards the center of the sculpture. Made of weather resistant corten steel, serving as raised garden beds, for later planting. Visitors can stroll around and between the various individual segments.

The ammonite sculpture, constructed out of dead iron comes to life with its first shoot, after sowing the seeds, into a new edible life - just as early mankind started to make the earth usable for themselves, tilling the soil, about 8,000 years ago.

The Size and extent of the installation is very flexible and can be modified to suit on-site conditions. However a diameter of at least 10 meters is recommended. The height of the “garden beds” are not dependent on the sculpture`s diameter. Starting at around 1 meter and then descending toward the center.

Utilization, impressions and attractions: What the visitors will experience

The following statements and proposals refer to the application for the Federal Garden Show - the sculpture can of course be used in many different ways for the private sector. A glowing garden ammonite is already being planned...

Of course, you could simply use these sculptures as “flower pots”, and plant them with the appropriate flowers with color schemes of choice – single or multi-colored – depending on the season. That in itself certainly would be a stylish eye-catcher. But…

As an artist of this city, I wish to actively involve the citizens and its institutions in the BUGA. I would like to stimulate my fellow townsfolk and institutions to become actively involved in the BUGA with their own individual creations. Allotments have now become very popular just like in the nearby “In der Au”.
The idea is to lend, rent, sell or raffle each individual “single plot” of the ammonite sculpture to the citizens and/or institutions of Mannheim.
A new “small / tiny garden colony” could be created, each raised bed “single plot” owner or tenant is responsible for his or her part and determines what is to be planted, enjoyed and harvested in their section.

Thus the Smiths could grow their own lettuce, while the Aydins may prefer tomatoes, the Topraks cabbages and the kindergarten perhaps a broccoli patch. All organic, of course! The ammonite would thus be “greened” with such variety and reborn and awakens to a new, a second life - and not only for the ammonite itself.

Both local hobby gardeners and visitors to the BUGA „meet at the beets“ (flower beds, plots, Ammonite patches) — a “living meeting spot” of togetherness, a place of interaction and encounter. People stroll amidst the “ammonite plots” as the sculpture becomes greener and greener, feel invited and possibly even inspired to become gardeners themselves. They marvel at the variety of crops or simply seeing it as “only” beautiful and exciting. 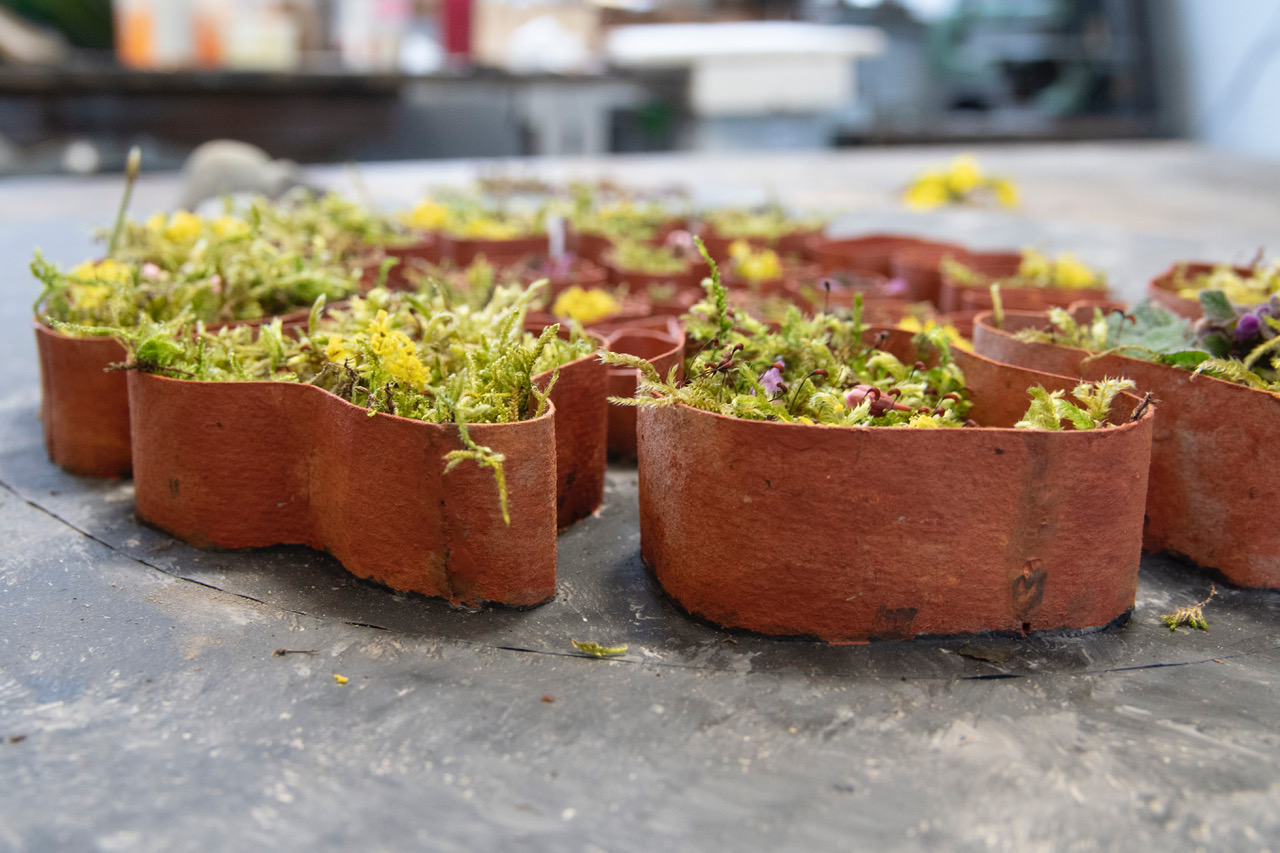 A further possibility for the “use” of the sculpture is “our daily bread”— dedicated to the most elementary and important staple diet in the world.
In this version the green ammonite will introduce visitors to the diverse varieties of wheat, cereals and grains from around the world. Each section with its own species.

This great variety of grains is the basis of Germany’s unique diversity of bread and pastry assortments.

Not only summer or winter wheat grow in the individual “pots” – there is a segment   for spelt (a traditional wheat sort becoming popular again) one for green kernels that sprout old varieties such as einkorn, wild barley, rye and wild emmer are cultivated again. Planted at the beginning of the BUGA—harvested toward the end.

Information boards provide tips for a healthy diet and for a conscious, sustainable nutrition. How about trying a sample? 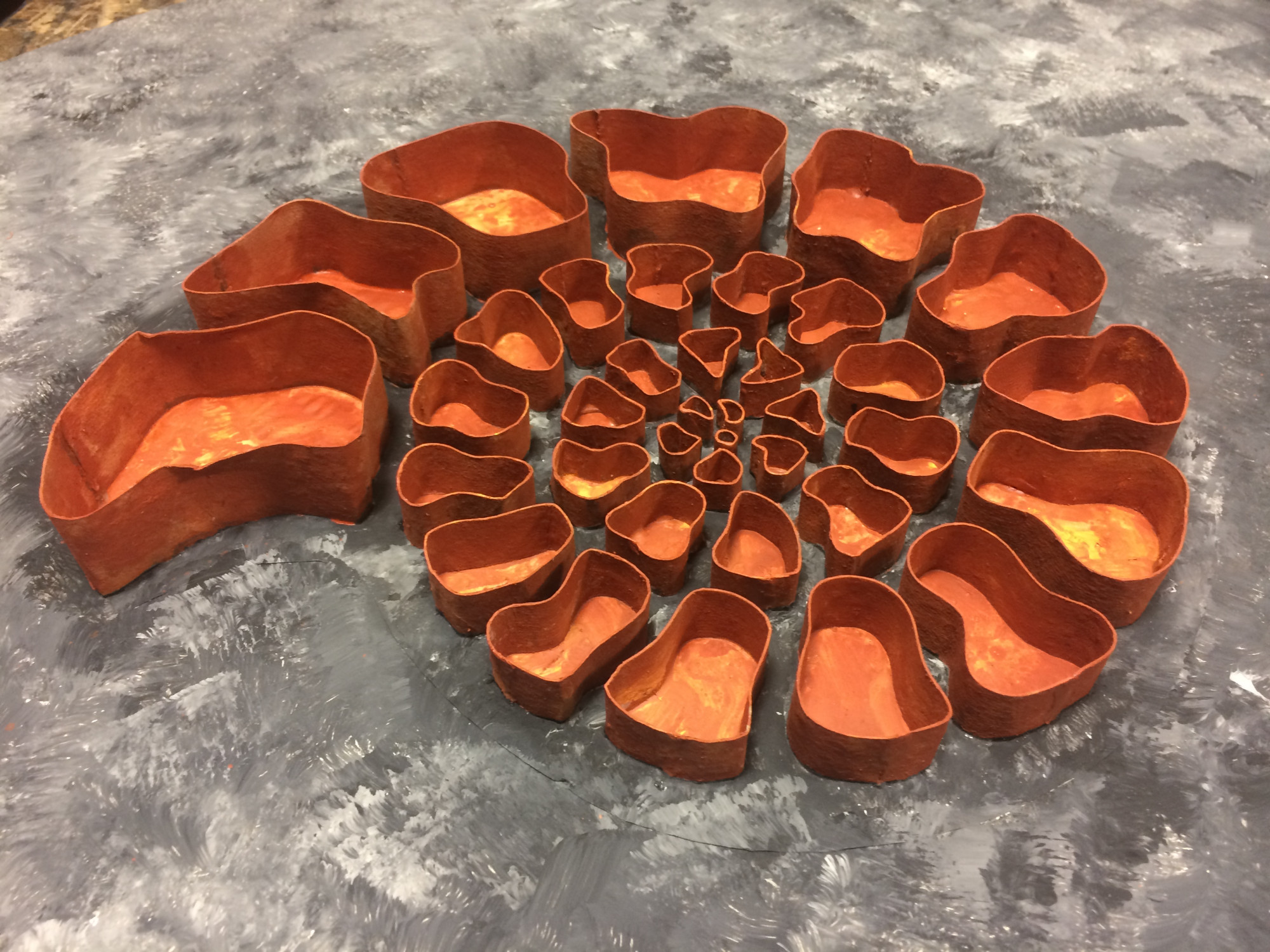 The Mannheim sculptor Hendrik Hackl has been working with “millions of years” for more than thirty years. Fossil finds from around the globe are the essential core of each work of art. Through his artwork he gives petrified fossils a new lease of life and artistically shows us brief snapshots of moments in evolution.

His favorite “raw materials” are ammonites — a fascinating spiral form, convoluted tentacles of prehistoric octopi (octopuses to the layman). They were originally formed from limestone-mud, gradually entering the empty compartments. The amount of water or air in each compartment determined whether they sank or floated. After millions of years they can be found again in their fossilized form.

The Ammonite tells us a story about the origins of the Earth and the emergence of life, both from their own “journeys” and ultimately also of ourselves as human beings who – when thought of in terms of the Earth`s age - have only recently populated the planet. Such finds enable us to precisely picture the timescale of evolution of both flora and fauna and enable us to see flashbacks of our own past.

The GREEN AMMONITE project enables the artist to transport fossils from prehistoric times into the present day and to let them „reappear“ Erstwhile crucial air segments of the prehistoric nautilus are given a new life sustaining mission „a new role in a new life“. Instead of being filled with air or water they are filled with fertile soil and now entrusted with a new task. Time to start sowing!